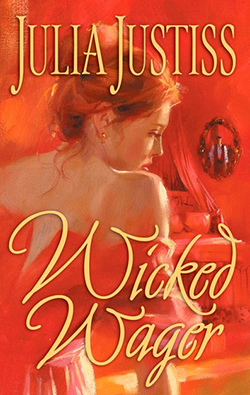 She was the one woman who could reform his wicked ways ...

Lord Anthony Nelthorpe had committed many sins -- not the least of which was his hare-brained attempt to seduce the well-bred Jenna Montague Fairchild into marrying him. But that was three years past, before the war magnified life's conceit; after Waterloo, he who scoffed at honor, was nursed back to health by the very woman he'd wronged, while her husband, a man of honor, Jenna could not save.

Back in London, Tony seized the chance to shake the wealthy young widow out of her frightening apathy -- even if he was the last man on earth she wanted to see. He hit upon a challenge: since Jenna was the instrument of saving his rascal skin, did she not owe it to all those heroes to make a better man of him?

She would train him until Christmas -- the season of miracles. Now Tony just had to figure out how to win this wager without wanting her all over again...

"A charming tale of learning to love again in spite of life struggles."

"This is one of those rare books it pays to take your time to read instead of rushing through. Realistic characters and high emotional appeal will keep you reading, waiting to see what happens next."

"Romance, intrigue, backstabbing among the upper crust of London society, this book has everything lovers of Harlequin romances live for!"

"Julia Justiss has written a wonderful novel that captured me from page one right through the very last sentence on the very last page."

As Lord Anthony Nelthorpe, formerly captain in the 1st Royal Dragoons, stepped across the threshold of his London townhouse one foggy fall morning, a giggling, mostly naked woman burst onto the upper landing and fled down the stairs. A balding, half-naked man followed, eyes focused owlishly on his hand clutching the rail as he maneuvered the steps and then lurched off after her.

"So, Carstairs," Tony remarked to the retainer in threadbare livery who had opened the front portal for him,

"I see my father is engaged in his usual pursuits."

"Yes, my lord," the man replied, his age-spotted hand trembling as he struggled to close the heavy door. Tony turned to assist him, remembering only at the last minute that this wasn't the army anymore, where a man in battle helped another man, regardless of rank. Carstairs would be as embarrassed as he was shocked, should his master's son and heir lower himself to assist the butler.

Curling the fingers he'd extended toward the servant into a fist, Tony turned away. "I expect the earl will be too...preoccupied to receive me this morning. At a more opportune moment, would you tell him I've arrived—and have some beef and ale sent to the library now, if you please?"

The butler bowed. "At once. On behalf of the staff, may I say 'welcome home,' Master Tony."

"Thank you, Carstairs." At his nod, the old man shuffled down the hall in the direction of the servants' stairs.

Mouth setting in a thin line, Tony watched him retreat, noting the hall carpet was as worn as the butler's uniform and dirty besides. Shifting his weight painfully, he limped toward the library, noticing as he went the layer of dust that veiled the few pieces of furniture and the ornate arches, which in his youth had sheltered exquisite Chinese vases set on French marquetry tables. Long gone now, of course.

Evidently Tony's esteemed father, the Earl of Hunsdon, still preferred to squander whatever income could be wrung from his heavily mortgaged estates on liquor and the company of lovelies such as the one who'd recently tripped down the stairs, rather than keep his house in good order.

Gritting his teeth, he made himself continue the rest of the way down the hall, sweat popping out on his brow at the effort. The surgeons who'd put the pieces of his shattered knee back together had predicted he'd never walk again. He still wasn't very good at it, he admitted as he reached the library door and clung to the handle, panting. Thank God riding was easier.

A high-pitched squeal interrupted him, followed by a rapid pad of footsteps. The bawd ran into view, pausing with a shocked "oh, la!" when she spied him.

With matted hair dyed an improbable red that matched the smeared paint upon her lips and nipples, powder caked in the wrinkles of her face and beneath her sagging breasts, she was not an enticing sight, even had he been in better shape to appreciate the appeal of a mostly naked female. But then, with his ugly limp and post-hospital pallor, he was none too appealing himself.

Still, he'd seen his father unclothed, and Tony was twenty-five years younger besides. Not wishing to give the tart an opportunity to change targets, he ducked into the library, slammed the door and limped toward the desk.

With a groan, he collapsed in the chair. Well, Tony, despite the carnage of war, you made it home, he thought. No longer a captain, but once again Viscount Nelthorpe—whoever the hell that is.

Certainly not the self-absorbed, vain aristocrat so confident of his position in the world who'd left this house one drink-hazed night three years ago. Having lost more gaming than he could borrow to repay, he'd staggered home to ask his father for a loan. When that gentleman consigned him to the devil, with the threat of debtor's prison hanging over him, he'd had little choice but to leave his debts of honor unpaid and flee England, taking with him only the clothes on his back, his horses, and a commission in Wellington's Fighting Fifth Infantry—won in a card game.

Nothing like privation, terror, hunger and pain to give one a fresh perspective, he observed wryly.

Though he wasn't sure yet what he was going to do with that hard-won wisdom. Now that his eyes had adjusted to the gloom within the curtain-shrouded room, he noted the library was as dusty and unkempt as the hallway. Lord knows, he thought, puckering his brow in distaste, there was work enough to be done here.

A knock interrupted his reflections, followed by the entry of Carstairs. The butler carried a tray from which emanated such appealing odors that, for the moment, Tony forgot everything except that he'd not eaten since last night. Fool that he was, he'd thought to reach London before nightfall despite the slower pace necessitated by his recovering knee. Darkness having overtaken him on the road, he'd been forced to engage a room for the night and had not had cash enough to pay for his accommodations, dinner and breakfast, too.

Grimacing, Carstairs balanced the tray while he pulled a handkerchief from his pocket and hastily wiped clean a spot on the desktop. "Begging your pardon for the conditions, Master Tony, but last winter his lordship let go all the servants but me, Betsy and one parlor maid—a good girl, but she can't manage all alone. Betsy's as fine a cook as ever, though, so you needn't be worrying about your dinner. She sends along her welcome, too."

As he spoke, Carstairs removed the cover on the dish, sending Tony a drool-inducing waft of beef-scented air. "Tell Betsy that, after what the army ate—or more often, didn't eat—in the Peninsula, she could give me no finer welcome home than this! As for the estate—I know you have done your best. I mean to do something about...conditions." Though heaven knew what, as he was nearly as pockets-to-let now as the night he'd run away.

But instead of returning the skeptical lift of brow a Nelthorpe's promise of improvement should merit, the old man's face brightened. "We know if anyone can turn it around, you will, Master Tony. After all, you be one of the Heroes of Waterloo!" After giving him a deep bow, as if he deserved the highest respect, the butler left.

Hero? he thought as he gazed after Carstairs with a self-mocking curl of his lip. If you only knew.

But surviving such a battle made one practical as well as philosophic. No sense letting the bleak memories spoil what appeared to be an excellent breakfast and some fine English ale. He'd wait until after he tucked into it to begin pondering his future.

Somehow he hadn't thought beyond the driving imperative to return home. After years of giving and taking orders in the army, followed by the day-by-day struggle to recover from his wounds, he found it disconcerting rather than relaxing to admit he had no plans whatever.

He must talk with Papa and determine just how grim their financial condition was—though judging from what he'd already seen, that looked to be grim indeed. Given the scene he'd happened upon as he arrived, any such conference would have to wait until this afternoon at the earliest.

With the ease of long practice, he submerged the sense of hurt that, despite having sent a letter informing his sire of his imminent arrival, his father hadn't bothered to remain sober long enough to personally greet the son he'd not seen in three years. So, what to do next?