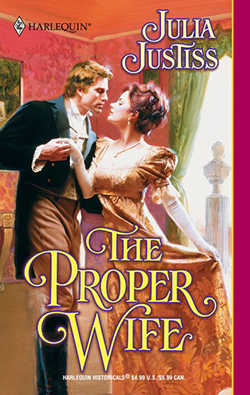 "I must seek a sensible middle-class bride..."

"Julia Justiss skillfully blends traditional Regency attention to detail with a touch of humor and of irony, but, best of all, with a witty love story."

"If Clare is not Sinjin's vision of a perfect wife, she is the perfect wife for him. If THE PROPER WIFE is not a perfect love story, it comes darn close."

"Julia Justiss can definitely join the ranks of "Buried Treasures."

"A spirited Regency-era romance that far outshines the usual fare...Justiss is a promising new talent, and readers will devour her tantalizing tale with gusto."

Knowing Sinjin must marry an heiress to keep his bankrupt estate from the block, his childhood sweetheart, now Sarah, Lady Englemere, has (without his knowledge) asked her friend, Society beauty Clarissa Beaumont, to help Sinjin find suitable candidates. Join Sinjin and Clarissa as they meet for the first time face-to-face:

"You do wish to marry, do you not? Or was I misinformed?"

That was rather blunt, and Sinjin felt himself flushing. "It is my intention to seek a wife, yes. But I expect to look...elsewhere for her."

Clarissa's lip quirked in some amusement. "Elsewhere, my lord? Balls such as this may include guests not, ah, useful for your purposes, but they are, I guarantee, more comfortable than the gauntlet of hopeful mamas you will run at such a Marriage Mart as Almacks."

Once again she tilted her head and watched him. Wishing to bring the conversation to an end as expeditiously as possible, he said nothing.

When he remained silent, she continued, "Given your wartime service, I would not have expected you to avoid beginning a task merely because you judge it...unpleasant. Indeed, the more undesirable it be, the better to accomplish it speedily."

Her facile advice irritated him even more than her presumptuous assumption there existed no society other than the exclusive one she herself frequented. His answer was therefore blunter than he might have wished.

"I intend, Miss Beaumont, to seek a bride from among the merchant class."

She was quick-witted at least, for her reaction was more curiosity than confusion. "Whatever for? Despite the current state of your finances, given your lineage and reputation you would still be accounted an eligible suitor for ladies of your own class. As you must know."

Could she not simply say, "Indeed, my lord" and leave it at that? 'Od's breath, intelligent as she appeared, surely his reticence clearly conveyed his desire not to pursue this matter further.

Annoyance sharpening, he said through clenched teeth," I do not think a lady of my--your--class would meet my requirements."

Uncertain even a sharp set-down would curb Miss Beaumont's unladylike persistence, Sinjin grudgingly took the more polite path of answering. However, not having yet progressed in his own mind from what he didn't want to what he did, he had to grope for a reply.

"Modesty. Simplicity. Temperance in all things."

"And ladies of breeding are not modest, simple, or temperate?" she asked in a silky voice.

"You force me to be unchivalrous, but in my observation, generally not."

"I see." Long lashes swept down, concealing her expression. She picked up a deck of cards and idly began to shuffle. "Any other strictures?"

He eyed the cards with distaste. "An aversion to throwing away hard-won money at games of chance."

She looked up, a little smile playing at the corner of her lips. "Oh, but cards are so amusing. And we ladies normally play for chicken stakes. I can't recall ever losing more than four or five hundred pounds of an evening. But your list interests me, my lord. What else would you seek in a bride?"

He recalled her smug satisfaction at his reaction to her looks, the casual way she dismissed her court. "Beauty is a highly overrated attribute--a mere accident of birth, is it not? Of much greater value are lack of vanity and flirtatiousness. A lady content to remain at home of an evening, not forever gadding about vying for the attention of men. One educated enough to make pleasant conversation, perhaps possessing some skill at an instrument." Warming to the task now, he added, "Naturally, given my circumstances, she must be clever at household management, possess a cheerful disposition and be not so toplofty that she considers honest labor beneath her."

"Generous, wise, modest, and thrifty?" she summarized. "And, of course, innocent of all the vices of aristocracy."

Suspicious of her mild tone, he eyed her frostily. "Such attributes would not come amiss."

She shuffled the cards and cut them with a snap, then looked up, green eyes glittering. "My dear Colonel, you seek not a wife, but a saint."

The original of this portrait was painted in color and used in black and white for the inside cover. The Art Department let me have a color copy, but I'm not allowed to post it on the web site, alas. So you'll have to gaze at the vignette below and imagine how glorious the full color version is... 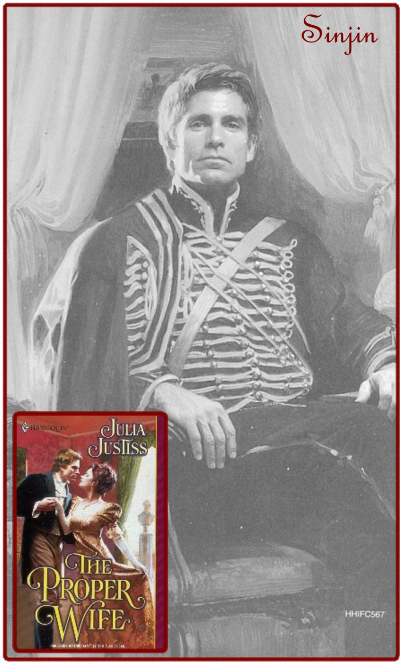 Imagine the entire portrait in color, instead of just this vignette from the back cover.