The Rake To Rescue Her 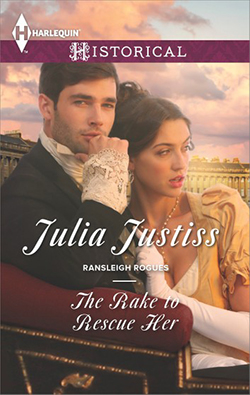 He's never forgotten her. But can he forgive her?

When Alastair Ransleigh sees Diana, Duchess of Graveston, for the first time since she jilted him, he makes her a shockingly insulting offer…the chance to become his mistress. And even more shockingly, she accepts!

But the widowed duchess is nothing like the bold, passionate girl Alastair once loved. Years of suffering at the hands of a cruel husband have taken their toll. And as Alastair resolves to save Diana from the damage of the past, their chance meeting turns feelings of revenge to thoughts of rescue…

"An addictive Regency romance that effortlessly transported me back in time."

"The Ransleigh Rogues return with a passionate and poignant tale of betrayal, revenge, sexual healing and second chances. This is another keeper with strong characters and authentic settings"

Shock rocked him like the blast of air from a passing canon ball. Struck numb in its wake, Alastair Ransleigh, late of His Majesty’s First Dragoons, stared at the tall, dark-haired woman approaching from the other side of Bath’s expansive Sidney Gardens.

Even as his disbelieving mind told him it couldn’t be, he knew on some level deeper than reason that it was Diana. No other woman had that graceful, lilting step, as if dancing as she walked.

Heart thundering, he exhaled a great gasp of breath, still unable to move or tear his gaze from her.

So had she glided into the room the day he’d first met her, bringing a draft of spring air and enchantment into the Oxford study where the callow collegian he’d once been had gone to consult her father, a noted scholar.

Memory swooped down and sank in vicious claws. Just so he’d watched her, delirious with delight, as she walked into the Coddingford's ballroom eight and a half years ago. Awaited her signal to approach, so her father might announce to the assembled guests the engagement he’d told all his friends to expect.

Instead, she’d given her arm to the older man who followed her in. The Duke of Graveston, he’d belatedly recognized. The man who then announced that Diana was to marry him.

A sudden impact at knee level nearly knocked him over. “Uncle Alastair!” his six-year-old nephew Robbie shrieked, hugging him about the legs while simultaneously jumping up and down. “When did you get here? Are you staying long? Please say you are! Can you take me to get Sally Lunn cakes? And my friend, too?”

Jolted back to the present, Alastair returned the hug before setting the child at arm’s length with hands that weren’t quite steady. Fighting off the compulsion to look back across the gardens, he made himself focus on Robbie.

“I’ve only just arrived, and I’m not sure how long I’ll stay. Your Mama told me you’d gone to the Gardens with Nurse, so I decided to fetch you—yes, we’ll get cakes. And your friend?”

Still distracted, he followed his nephew’s pointing finger toward a boy about Robbie’s age, dressed neatly in nankeens and jacket. The child looked up at him shyly, the dark hair curling over his forehead shadowing his blue, blue eyes.

With another paralyzing shock, he realized Robbie’s friend must be her son.

The son that should have been his.

Pain sharp as acid scalded his gut, followed by a wave of revulsion. Buy the boy cake? He’d as soon give sustenance to a viper!

Shocked by the ferocity of his reaction, he hauled himself under control. Whatever had occurred between himself and Diana was no fault of this innocent child.

It was the suddenness of it, seeing her again after so long with no warning, no time to armor himself against a revival of the anguish of their bitter parting. The humiliation of it, he thought, feeling his face redden.

Certain there must be some mistake, he’d run to her. Desperate to have her deny it, or at the very least, affirm the truth to his face, he’d shouted after her as the Duke warned him off and swept her away. Never once as he followed them did she glance at him before his cousins dragged him, shouting still, out of the ballroom…

Hurt pierced him, nearly as sharp as on that night he remembered with such grisly clarity.

An instant later, revitalizing anger finally scoured away the pain.

Ridiculous to expend so much thought or emotion on the woman, he told himself, sucking in a deep, calming breath. She’d certainly proved herself unworthy of it. He’d gotten over her years ago.

Though, he thought sardonically, this unexpected explosion of emotion suggested he hadn’t banished the incident quite as effectively as he’d thought. He had, however, mastered a salutary lesson on the perfidy of females. Cold-hearted, devious, and focused on their own self-interest, they could be lovely, sometimes entertaining, and quite useful for the purpose for which their luscious bodies had been designed.

So, after that night, had he treated them, as temporary companions to be enjoyed, but never trusted. And never again allowed close enough to touch his heart.

So he would treat Diana now, with cordial detachment.

His equilibrium restored, he allowed himself to glance across the park. Yes, she was still approaching. Any moment now, she would notice him, draw close enough to recognize him.

Would a blush of shame or embarrassment tint those cheeks, as well it should? Or would she brazen it out, cool and calm as if she hadn’t deceived, betrayed and humiliated him before half of London’s most elite society?

Despite himself, Alastair tensed as she halted on the far side of the pathway, holding his breath as he awaited her reaction.

When at last she turned her eyes toward them, her gaze focused only on the boy. “Mannington,” she called in a soft, lilting voice.

The familiar tones sent shivers over his skin before penetrating to the marrow, where they resonated in a hundred stabbing echoes of memory.

“Please, Mama, may I go for cakes?” the boy asked her as Alastair battled the effect. “My new friend, Robbie, invited me.”

“Another time, perhaps. Come along, now.” She crooked a finger, beckoning to the lad, her glance passing from the boy to Robbie to Alastair. After meeting his eyes for an instant, without a flicker of recognition, she gave him a slight nod, turned away, and began walking off.

Sighing, the boy looked back at Robbie. “Will you come again tomorrow? Maybe I can go then.”

“Yes, I’ll come,” Robbie replied as the child trotted after his mother. Grabbing the arm of the boy’s maid, who was tucking a ball away in her apron, his nephew asked, “You’ll bring him, won’t you?”

The girl smiled at Robbie. “If I can, young master. Though little notice as her grace takes of the poor boy, don’t see that it would make a ha’penny’s difference to her whether he was in the house or not. I better get on.” Gently extricating her hand from Robbie’s grip, she hurried off after her charge.

Alastair checked the immediate impulse to follow her, announce himself to Diana, force a reaction. Surely he hadn’t changed that much from the eager young dreamer who’d thrown heart and soul at her feet, vowing to love her forever! As she had vowed back to him, a bare week before she gave her hand to an older, wealthier man of high rank.

Had he been merely a convenient dupe, his open devotion a goad to prod a more prestigious suitor into coming up to snuff? He’d never known.

Sudden fury coursed through him again that the sight of her, the mere sound of her voice, could churn up an anguish he’d thought finally buried. Ah, how he hated her! Or more precisely, hated what she could still do to him.

Since the night she’d betrayed him, he’d had scores of women and years of soldiering, throwing himself into the most desperate part of the battle, determined to burn the memory of loving her out of his brain.

While she seemed, now as then, entirely indifferent.

Mechanically he gave his nephew a hand, walking beside him while the lad chattered on about his friend and his pony and the fine set of lead soldiers waiting for them in the nursery, where they could replay all the battles in which Uncle Alastair had fought. It required nearly the whole of the steep uphill walk from Sidney Gardens across the river back to his sister’s townhouse in the Royal Crescent for him to finally banish Diana’s image.

Damn, but she’d been even lovelier than he remembered.

The poet and dreamer of the Rogues, Alastair was set on a literary career that would have seen him best Byron, until a humiliating betrayal by his fiancé destroyed his trust in women and love. Determined to die valiantly in battle, he joined he army, participating in many of the most desperate actions on the Peninsula. Returning unharmed after Waterloo, he meets by chance the woman who wounded him—and when she unexpectedly accepts his audacious proposal that she become his mistress, he sees a way to free himself forever from her spell. But years of harsh treatment have changed Diana, the now-widowed Duchess of Graveston, into a complex, embattled woman even more fascinating than the girl he loved. His unwilling compassion aroused, Alastair feels compelled to assist her overcome the forces now fighting against her. But can he help her escape demons past and present without falling for her all over again?

When a ruthless nobleman determined to add this beautiful girl to his “collection” threatened to ruin her father and the man she loved, Diana gave up her life to protect them. Resistance to her husband’s attempts to control her the only part of herself she has left, over years of bitter abuse, Diana locked down her emotions and tried to erase every trace of feeling—even for her son. The Duke’s death freed her--only to face a new challenge, the enmity of his eldest son and heir, who blames her for his mother’s death and his father’s estrangement. Fleeing Graveston Court to try to protect herself and her son from the heir’s promised revenge, she unexpectedly encounters Alastair, and fulfilling a vow, offers to do whatever she can to right the wrong she did him. But can she give her body to the passionate and tender Alastair and still keep submerged all the feelings she suppressed years ago?