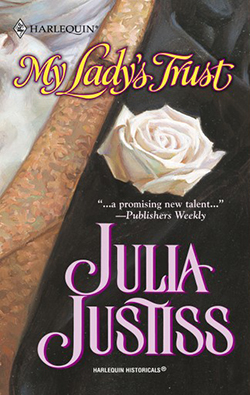 Laura Martin cannot permit herself to accept Beau Bradsleigh's offer of friendship, no matter how attracted she is to the earl. But intrigued by the lady who saved his brother's life and unaware of the dangerous secret of her past, Beau is determined to penetrate her wall of secrecy and win...My Lady's Trust.

"With this exceptional Regency-era romance, Justiss adds another fine feather to her writing cap."

The crisp fall breeze, mingling the scents of falling leaves and the sharp tang of herbs, brought to Laura Martin's ear the faint sound of barking interspersed with the crack of rifle shot. The party which had galloped by her cottage earlier this morning, the squire's son throwing her a jaunty wave as they passed, must be hunting duck in the marsh nearby, she surmised.

Having cut the supply of tansy she needed for drying, Laura turned to leave the herb bed. Misfit, the squire's failure of a rabbit hound who'd refused to leave her after she healed the leg he'd caught in a poacher's trap, bumped his head against her hand, demanding attention.

"Shameless beggar," she said, smiling as she scratched behind his ears.

The dog flapped his tail and leaned into her stroking fingers. A moment later, however, he stiffened and looked up, uttering a soft whine.

"What is it?" Almost before the words left her lips she heard the rapid staccato of approaching hoofbeats. Seconds later one of the squire's grooms, mounted on a lathered horse and leading another, flashed into view.

Foreboding tightening her chest, she strode to the garden fence.

"What's wrong, Peters?" she called to the young man bringing his mount to a plunging halt.

"Your pardon, Mrs. Martin, but I beg you come at once! There were an accident-a gun gone off…" the groom stopped and swallowed hard. "Please, ma'am!"

"How badly was the person injured?"

"I don't rightly know. The young gentleman took a shot to the shoulder and there be blood everywhere. He done swooned off immediate, and-"

Her foreboding deepened. "You'd best find Dr. Winthrop. I fear gunshots are beyond-"

"I see." Their local physician's unfortunate obsession for strong spirits all too frequently left him incapable of caring for himself or anyone else. 'Twas how she'd gained much of her limited experience, stepping in when the doctor was incapacitated. But gunshot wounds? The stark knowledge of her own inadequacy chilled her.

Truly there was no one else. "I'll come at once."

"Young master said as how I was to bring you immediate, but I don't have no lady's saddle. 'Twill take half-an-hour 'n more to fetch the gig."

"No matter, Peters. I can manage astride. Under the circumstances, I don't imagine anyone will notice my dispensing with proprieties. Help me fetch my bag."

She tried to set worry aside and concentrate on gathering any extra supplies she might need to augment the store already in her traveling bag. The groom carried the heavy satchel to the waiting horses and gave her a hand up. Settling her skirts as decorously as possible, she waited for him to vault into the saddle, then turned her restive horse to follow his. Spurring their mounts, they galloped back in the direction of the marsh.

As they rode, she mentally reviewed the remedies she brought. During her recovery from the illness that nearly killed her, she'd observed Aunt Mary treat a variety of agues, fevers, and stomach complaints--but never a gunshot. To the assortment of medicaments she always carried she'd added a powder to slow bleeding, brandy to cleanse the wound and basilica powder. Had she thought of everything?

She had no further time to worry, for around the next bend the woods gave way to marsh. A knot of men gathered at the water's edge. As she slid from the saddle, she saw at their center a still, prone figure, the pallor of his face contrasting sharply with the scarlet of the blood soaking his coat. His clothing was drenched, his boots half-submerged in water whose icy bite she could already feel through the thin leather of her half-boots. The squire's son Tom held a wadded-up cloth pressed against the boy's upper chest. A cloth whose pristine whiteness was rapidly staining red.

Her nervousness coalesced in firm purpose. She must first stop the bleeding, then get the young man back to Everett Hall.

At her quiet command, Tom looked up. "Thank God you're here!" His face white beneath its sprinkling of freckles, he moved quickly to let her kneel beside the victim. "He's bled so badly-and…and he won't answer me. Is-is he going to die?"

"Help me," she evaded. "Lean your full weight against him, hard. Keep that cloth in place while I bind it to his shoulder. Did the shot pass straight through?"

"Easy, now--keep the pressure firm." To steady Tom-and herself, she said, "Tell me what happened."

"I'm not sure. The dogs raised a covey, and we both fired. The next moment, Kit clutched his chest, blood pouring out between his fingers. Maybe--perhaps one of our shots hit that bluff and ricocheted. He fell in the water, as you see, and we dragged him to land but feared to move him any further until help arrived."

Listening with half an ear, she worked as quickly as she could, her worried eye on the unconscious victim's gray face and blue-tinged lips. If the shot was still lodged in his body, it must be removed, but at the moment she didn't dare explore the wound. Fortunately, the chill that numbed him also slowed the bleeding. She only hoped the effect would last through the jolting necessary to take him to shelter. And that his dousing in frigid water wouldn't result in an inflammation of the lungs.

The desperate note in Tom's voice recalled her attention. Avoiding a direct answer, she looked up to give him a brief smile. "We must get him out of the cold. Have you sent to the Hall?"

"Yes. My father should be along any moment."

Indeed, as Tom spoke they heard the welcome sound of a coach approaching. Riding ahead was the squire, a short, rotund man on a piebald gray. He took one long look at the scene before him and blew out a gusty breath.

"If you would help me bind this tightly, we can move him into the carriage and back to the Hall."

After securing the bandage, she directed the grooms to carry the victim to the coach, the unconscious man groaning as they eased him against the padded squabs.

"Tom, ride on ahead and alert Mrs. Jenkins. We'll need boiling water and hot bricks and such." The squire shook his head, his nose red with cold and his eyes worried. "Go on, I'll settle with you later. There'll be a reckoning to pay for this day's work, make no mistake!"

Wordlessly his son nodded, then sprinted to his mount. After assisting Laura into the carriage beside her patient, the squire hesitated. "You'll tend him back at the Hall?"

"Until more experienced help arrives, of course. But I recommend you send someone with strong coffee to sober up Dr. Winthrop, or over to the next county for their physician. I've no experience with gunshots, and to tell the truth, the young man looks very badly."

To her surprise, the squire seized her hands. "You must stay, Mrs. Martin, and do all you can! 'Tis no country doctor we'll be having! I've sent word to the lad's brother to come at once and bring his own physician. Please say you'll stay with the boy until he arrives!"

An instinctive prickle of fear skittered up from her toes and lodged at her throat. She glanced at the still figure beside her. Was there something familiar about that profile? "He is from a prominent family?" she ventured, already dreading the response.

"Younger brother of the Earl of Beaulieu."

For a moment her heart nearly stopped. "The Puzzlemaker?" she asked weakly. "Friend to the Prime Minister, one of the wealthiest man in the realm?"

"Aye, he founded that daft Puzzlemaker's Club, but he's a sharp 'un, for all that. It's said Castlereagh don't make a move without consulting him. Been visiting friends up north, with this cub set to join him next week." The squire sighed heavily. "When I consider what Lord Beaulieu may think should his brother Kit die in my care… I do swear, I rue the day my Tom met him at Oxford."

"Surely the earl could not hold you responsible."

The squire shrugged, then raised pleading eyes to hers. "I beg you to stay, Mrs. Martin. With any luck, my messenger will reach the earl within hours and bring his physician back, mayhap by nightfall. I'd not have the worthless Winthrop near him, drunk or sober, and Lord knows, my sister will be no help. Mistress Mary thought so highly of your skill-none better in the county, she swore. Will you not keep the lad alive until his kin arrive?"

And thereby encounter the Earl of Beaulieu? All her protective instincts screamed danger as the metallic taste of fear filled her mouth, seeming stronger than ever after its near two-year hiatus. Though her first impulse was to jump from the carriage, mount the borrowed horse and race back to the safe haven of her little cottage, she struggled to squelch her irrational panic.

She must fashion a measured reply. The squire would be expecting from her nothing more extreme than worry.

While she fumbled for appropriate words, the squire sat straighter. "You cannot fear I'd allow the earl to take you to task should…the worst happen. My good madam, surely you realize your well-being is of great import to me!" He leaned closer and kissed her hand awkwardly. "I only seek to do all we can for the poor lad until his brother arrives."

"I know you would ever safeguard me," she replied, and managed a smile. You're being a nodcock, the rational part of her brain argued. The great earl was hardly likely to recognize her as one of the unremarkable chits making her bow he'd met but twice a handful of Seasons ago. Though this task was clearly beyond her skill, she had more expertise than any other person within a day's ride, and the boy needed help now.

As she vacillated, torn between the safety of refusal and the peril of acceptance, she heard again Aunt Mary's last words: "God spared you for a purpose, Missy. He's given you skill; use it wisely."

She glanced again at the boy, motionless and bloody beside her. Did not that innocent lad deserve the best possible chance to survive? Even if caring for him placed her in some risk.

But a risk much less serious than the young man's chances of dying if left untended.

"Have the coachman drive slowly; he must be jostled as little as possible," she said at last. "If the wound begins bleeding again, there will be nothing I can do."

The squire released a grateful sigh. "Thank you, ma'am. I'll keep pace by the coach. Call if you need me."

He stepped down and closed the door, leaving her in the shuttered semi-darkness with a barely-breathing boy whose powerful brother, Lord Beaulieu, would be upon her within hours, perhaps this very day.

What had she gotten herself into?